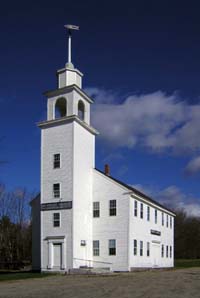 
On file  is a book listing old town residents, by Jessica Stevens

This annual publication deals with town events from both the past and present, giving a Lempster overview that is most interesting.
The 2002 issue carries an interview with Mrs. Frances Wirkala, a Lempster teacher beginning in 1932 and she is currently 91 years old.
Her rich storehouse of memories presents a perspective not often found today.

Glimpses of Old Lempster, a book

Published by the Croft Press of Lempster, this booklet, one of a series, provides a story of the family who built and lived in one of the older houses in the Lempster area,
the Asbury F. Perley house and its family. The volume is for sale directly from the Croft Press,$8.95 including shipping.

The Early History of Lempster

The following is from The Gazetteer of the State of New Hampshire, Printed by C. Norris & Co., Exeter,NH ©1817

Near the border of Washington is a pond about 320 rods long and 80 wide,
and another lying partly in Marlow 420 long and 70 wide, besides several others of a smaller size Lempster is also watered by sugar river and two branches of Cold river.
The easterly part of the town is mountainous over which part passes the 2d NH turnpike from Amherst to Claremont. In this town also the Charleston turnpike branches off.
There are here 7 school houses, and 1 congregational meeting house. Rev. E. Fisher was the first and only minister ever settled in this town. He was ordained in 1787, and is still in office.

In 1812, eighteen persons died in this town, and twelve of them of the spotted fever. In 1813, five other died of that disease.
This fever first appeared in Lempster on the 20th of March, 1812, and continued spreading its malignant contagion till the 3d of April in 1813,
it again appeared about the middle of April, and in June it assumed the form of the mild typhus.
In 1803, twenty-four children died here in two months of the scarlatina anginosa. J.S.T.A.