Below is a picture of the Wedding of Elaine Edith Wood to Bennie Hubert Greene, July 23, 1950. 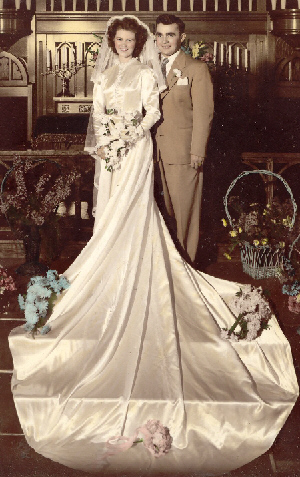 Mr. & Mrs. Bennie Greene are making their home in River Falls, where the groom is attending school, following a brief honeymoon in northern Wisconsin. The bride is the former Elaine Wood, daughter of Mr. and Mrs. Kenneth Wood, former residents of Neillsville. Mrs. Greene attended high school here. The groom is the son of Mr. and Mrs. Ben Greene Sr., of New Auburn.

The wedding ceremony was performed in Our Saviors Lutheran Church in Chippewa Falls. The church was decorated with baskets of seasonal flowers. In attendance were Miss Judith Nelson of New Auburn, Miss Joyce Fehr of New Auburn, friends of the bride, Miss Linda Greene, sister of the groom, Donald Wood, brother of the bride, Robert Carlson of Colfax, Richard Greene, the groom’s brother, Ronald Rindahl of Osseo and Duane Craig of Minneapolis.

Miss Jean Engebretson of New Auburn was the pianist and Betty Lou Morley sang two numbers. After the ceremony a reception was held in the church dining hall for 150 guests. Both Mr. and Mrs. Greene are graduates of New Auburn high school. The groom is completing his senior year at the State Teacher’s college in River Falls.

Caption under the picture in the Chippewa Hearld. Mr. and Mrs. Bennie Hubert Greene Jr., above whose marriage took place recently at Our Savior’s Lutheran Church in this city. The bride is the former Elaine Edith Wood, daughter of Mr. and Mrs. Kenneth Wood of Chippewa Falls, and the bridegroom is the son of Mr. and Mrs. Ben Greene Sr. of New Auburn. Rev. Clayton C. Engan performed the ceremony.

Mr. and Mrs. Greene, after a short honeymoon, will be at home in River Falls where the bridegroom is a senior at the River Falls State Teachers College.

Elaine Wood Repeats Vows With Bennie Greene Our Savior’s Lutheran Church in the city, was the scene of a pretty summer wedding; Sunday, July 23, at 2:30 o’clock, when Miss Elaine Edith Wood daughter of Mr. and Mrs. Kenneth Wood of Chippewa Falls, and Bennie Hubert Greene, son of Mr. and Mrs, Ben Greene of New Auburn, pronounced their wedding vows.

Rev. Clayton Engen, pastor of the church, performed the double ring ceremony. The church was decorated with baskets of seasonal flowers and the chancel held galdoli and candelabra which formed a lovely a lovely setting. The bride’s gown of white satin was entrain. She wore a fingertip veil and carried a bouquet of white roses and carnations. Two close friends and former classmates attended the bride, Miss Judith Nelson and Miss Joyce Fehr, New Auburn, bridesmaid. They wore gowns of blue frosted organdy over blue taffeta and carried bouquets of blue and pink asters with white carnations.

Miss Linda Greene, sister of the bridegroom, was junior bridesmaid. Here bouquet was colonial. The bridegroom’s attendants were the bride’s brother, Donald Wood who served as bestman, and a close friend Robert Carlson of Colfax was groomsman. All the men had pink and white carnation boutonnieres. Richard Greene the bridegroom’s brother and Ronald Rindahl, of Osseo, the bridegroom’s cousin ushered.

Miss Jean Engebretson, of New Auburn, presided at the piano, playing nuptial music before the ceremony and accompanying Miss Betty Lou Morley of Eau Claire, who sang "Because" and "The Lord’s Prayer" Each had a pink carnation corsage. A red and white carnation corsage complimented the printed Bemberg seer of the bridegroom’s mother, Mrs. Ben Greene Sr. The Bride’s mother, Mrs. Wood wore a light flowered crepe with a pink and white carnation corsage. The bridegroom’s maternal grandmother, Mrs. Julia Loken of Osseo; wore a black and white Bemberg sheer and a corsage of white carnations. After the ceremony a reception was held in the church dining hall for 150 guests. After a short honeymoon spent at a northern lake, Mr. and Mrs. Bennie Greene, Jr., will be at home in an apartment in River Falls where the bridegroom is a senior at the State Teacher’s College. Both Mr. and Mrs. Greene are graduates of New Auburn high school. Previous to here wedding, Mrs. Greene assisted her parents in operating the Cozy Café in Chippewa Falls.