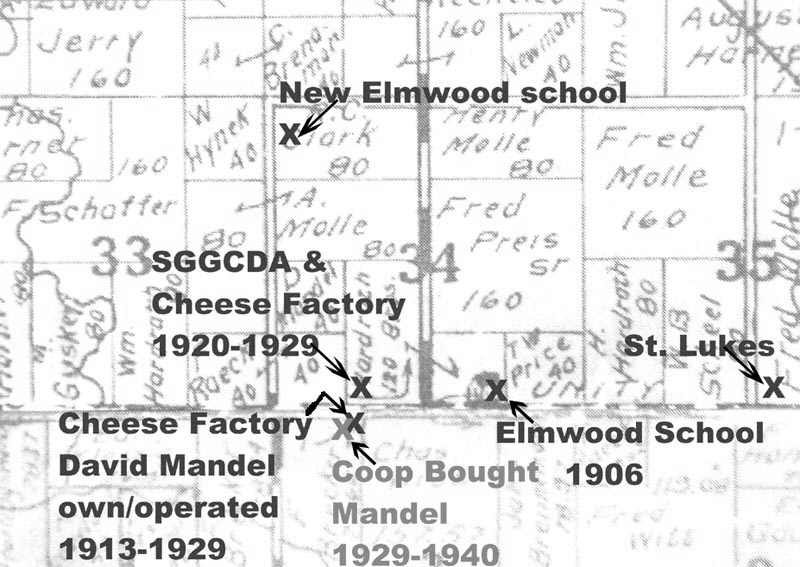 David Mandell died at his home in the town of Green Grove, Clark County, Wis. last Friday, of pneumonia, after an illness of only a few days, aged 38 years. He operated a cheese factory in Green Grove, and was a man of fine character, who will be missed by a large number of friends.

I understand from an article by "Bud" Hardrath that David "Dave" Mandel had owned and operated the Mandel Cheese Factory located in the Northeast corner of Frank Brecker property between 1913 - 1917. His wife [Barbara] and son [Alfred] Mandel continued to run this factory until about 1929.

About 1920 -1929 there was the South Green Grove Cooperative Dairy Association (SGGCDA) built across the street from David's factory. Which would have put this factory on Herman Hardrath's property in the southwest corner. When this one burned about 1929 is when the SGGCDA had bought the David Mantel Factory. About 1934 Eph Oman had bought this one.

So on the Business list I believe the first one and the second one are the same; except the location is incorrect for the Mrs. David Mandel own or managed. Also believe the one listed for Alfred and Lena Mandel is also the same as David's.

Now don't take my word for it. Since I don't know a thing about this area except what I have read and could piece together. Now the photo that Bud had was about 1915 or earlier. The one that is already posted to the site, this could be the same house, but just run down or of old age (??).

For a better understanding of the factories, review the plat maps for Green Grove (section #34) and Beaver Twps. (section #3) about 1915 time frame.