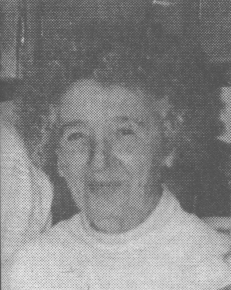 Felicia Cecelia Djubenski was born on Jan. 14, 1923, in Willard, Clark County, to Michael and Katherine (nee Zaranski) Djubenski. She was raised on the family farm in Willard and educated at North Mound School. After her education, she worked as a nanny for Dr. Johnson in Withee. She moved to St. Paul and worked at a sewing factory. She then moved to Chicago and worked for Idelman Battery Hydrometers. She then moved to Milwaukee and worked at a sewing factory, Q-P Diner and the Broadway Grill. She moved back to Willard and married Oliver Clayton LaFlex on Sept. 9, 1950, at Holy Family Catholic Church. She and her husband farmed south of Thorp until he died on Oct. 8, 1975. She then went to work in the bakery at Pabich's Super Market in Thorp, until she retired in 2000. She was a member of Holy Family Catholic Church and its PCCW, and KSKJ Lodge #136. Her interests included spending time with her family, gardening, flowers, birds and crocheting dolls.

Survivors include one brother, Andrew (Clarabelle) Djubenski, Greenwood; nieces, nephews and other relatives and friends.

The Thorp Funeral Home assisted the family with arrangements.