Nathan was just three years old when his parents, Daniel and Rosanna Clark sought a new home for themselves and their growing family in the promising territory of Wisconsin even before it became the thirtieth state.  "Nate" had ten brothers and sisters and he was the third son and fifth child.

At the age of 27, Nathan began practicing the tonsorial art (barbering) and hung usual tri-colored sign on the door of his shop on Main Street in Greenwood, Wisconsin, inviting the unshaven and unshorn to a seat in his comfortable barber chair. He shared the space with Joseph Pownder, who handled a full line of confectionery.  (THE TONSORIAL ARTIST SIGN--The traditional barbers pole represents ‘Blood and Bandages’. It originates from the grizzly days when barbers not only cut hair and shaved stubbly chins but also performed tooth extraction, bloodletting and some surgery. A traditional barbers pole has a brass finial representing the bleeding bowl. The bowl would have been kept at the top of the pole when not in use. The washed but still blood stained bandages were hung on the pole to dry. The wind whipped them around the pole giving us the red and white candy stripes we know today).

April 8, 1880, Adaline, the daughter of Charles E. & Margaret (McLaughlin) Cummings became Mrs. Nathan Clark, just a few months before her 20th birthday.  They resided in Mayville Twp. and the following February 3rd, (1881), they became the parents of a son, Frank Nathen Clark.  On the thirtieth day of May, 1882, she gave birth to another son, Newton Edwin Clark, and was apparently getting along nicely until a day or two before her death, she showed symptoms of puerperal fever, and though nothing was left undone that money and skilled physicians could do, her spirit was wafted to the other shore. The funeral services were conducted by the Rev. W. V. Schlung, and attended by a large concourse of sympathizing friends.  To add to Nathan's grief, Newton also died July 7, 1882.  Both mother and child were buried in the Memorial Cemetery, Colby, Clark Co., Wis.

At the time of these deaths, Nathan was involved in the manufacturer of and dealer in pine and hard-wood lumber, lath, shingles, pickets, and also in general merchandise, at Mayville.  A large mill was erected by himself and Albert D. Bass in 1881, and in 1885 Mr. Bass bought out his interest. The capacity of the mill is 30,000 feet per day, and cuts from two to three millions each year.  Nathan Clark and Albert Bass were very successful in the logging business.  Their camps were in the vicinity of Curtiss. 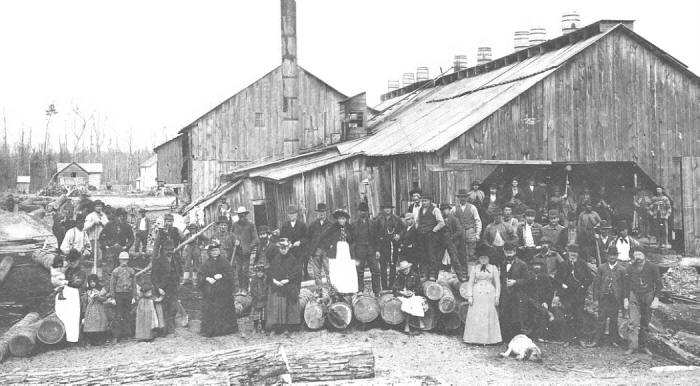 In the summer of 1885, Nathan married Philena Lydia Collier who had turned twenty five the 4th of June.  Her home town was Onalaska, La Crosse Co., Wisconsin and she was the daughter of Hirum and Celindia (Axtell) Collier.  The wedding took place August 13th, in Greenwood, Wis. with Rev. G. C. Andrews performed the ceremony.  Philena was the mother of a toddler, Fanny, who was born in January, 1883.  We have not found any record of an adoption, but from that time on, she was always known as "Fanny Clark".  In 1891, another daughter joined the family and they named her Mary.

At the age of fifty-two, Nathan Clark died at his home in Onalaska, on Thursday, Feb. 2nd, 1899. He was buried in the City Cemetery.  Nate Clark was a big hearted, splendid fellow and had hosts of friends in this county who will regret his death and sympathies with the widow and the fatherless.

In 1908, Philena (Collier) Clark failed to recover from an extended illness and died. She was buried in the Onalaska City Cemetery with other family members and her first husband, Nathan Clark.

Deceased was a former Colby lady, daughter of Mr. C. E. Cummings, and dearly loved by her many acquaintances. She was married to Mr. Clark, April 8th, 1880, and has since resided in the town of Mayville. On the thirtieth day of May she gave birth to a child and was apparently getting along nicely until a day or two before her death, she showed symptoms of puerperal fever, and though nothing was left undone that money and skilled physicians could do, her spirit was wafted to the other shore. The funeral services were conducted by the Rev. W. V. Schlung, and attended by a large concourse of sympathizing friends. The many friends of Mrs. Clark in this town deeply sympathize with Mr. Clark in his severe affliction.

The family of Norman Larson, whose home was burned Saturday afternoon, have stored their household' weeks on the road In the Interests of goods saved from the fire In the the Pickle & Canning company, house owned by Mrs. J. E. Blankley, while looking for another house. They are staying at present with the
Misses Mary and Fanny Clark.

A pleasant birthday surprise was given Mrs. Philena Clark Monday afternoon by a number of her friends and neighbors. Refreshments were taken along and a pleasant afternoon was spent. Mrs. Clark was the recipient of a handsome present in remembrance of the occasion.

The condition of Mrs. Philena Clark, who has been sick for sometime, is very low and no hopes are entertained for her recovery.