OF CLARK AND JACKSON COUNTIES, WISCONSIN

Transcribed by: Stan Schwarze for non-profit uses only.

– Eighty-five years ago this week, Missionary Jacob Hauser of the Reformed Church appeared at the lodge of Chief Blackhawk in Jackson County to start a chain of programs which resulted in the establishment of a mission school and mission church for the Winnebagos in Jackson County and the Winnebago School and Homes in Neillsville.

On July 9, 1878, he started the mission program among the Winnebago people, reopening a little log school erected earlier by the Indians, but which closed because of lack of money and leadership. On of the children to attend the first session of school, was John Stacy, a Winnebago who later became an Indian interpreter and lay worker among his people.

In 1884, Missionary Hauser, whose wife had died, was forced to discontinue his work, but his place was taken by a man who was to be a material and spiritual leader for 46 years. He was the Rev. Jacob Stucki, who had served as an assistant Indian missionary for three years. 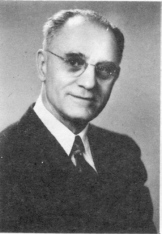 The Rev. Mrs. Stucki establish the first boarding school for Winnebago children, by taking into his home, a few children for schooling and boarding. In a short time the group had increased to 30 children, which was more than could comfortably be accommodated with living quarters in the small Stucki home. Soon a school building was provided, primitive in design and equipment.

The school continued to grow, services were held in a small mission church, but it was 20 years before there were any Indian converts to Christianity. Finally in 1898, three men and a woman took the step and accepted Christ. The were David Decorah, King of Thunder, John Stacy and his wife, Martha Tunderking. John Stacy lived many years as an assistant minister and missionary and was a man of sterling character, lay leader and farmer.

In 1920, a total of 33 acres of land was purchased in Neillsville, 25 miles upstream from the Jackson County Mission on the east bank of the Black River. Ben Stucki, a son of the Rev. Jacob Stucki, had returned in 1919 from a year of service in Italy with the U.S. Army Ambulance Corp, World War I. He was ready to join his brother, Calvin, in the study of medicine, but when his father asked him to take over the leadership of the new school to be erected in Neillsville, after much though and prayer, he decided to accept the call to leadership and for 42 years, he continued in the footsteps of his father.

In 1920, a total of $56,000 was received from the Women’s Missionary Society of the General Synod of the Reformed Church for the erection of the 42 by 76 building with a wing 27 by 26 for kitchen. It was built in west Neillsville, 200 feet east of the Black River, designed for 50 students, but was soon serving 73 Indian children. The new school in Neillsville was dedicated Oct. 9, 1921, with Ben Stucki as superintendent.

In 1929, the school was enlarge through contribution of a $56,000 fund provided by the Women’s Missionary Society of the Evangelical and Reformed Church, General Synod. This money provided for an addition to the original school building of 42 by 96 feet. The addition was to serve as a girls’ dormitory, additional classrooms, administrative offices, dispensary, sickrooms, library and laundry. The new addition was dedicated Nov. 17, 1929.

On May 10, 1930, the Rev. Jacob Stucki, a man and minister who had served 46 years in Christian service with the Winnebago people, died, leaving a void that could not be filled. A large procession of Christian Indians followed in the procession that bore his body to its last resting place in the Winnebago Mission churchyard, six miles east of Black River Falls, in Jackson County. Profound sorrow among the Indians, young and old, marked his passing.

Supt. Ben Stucki picked up the torch and carried the program of leadership for 42 years. The Indians found it easier to Call Benjamin Stucki "Mr. Ben," which became the loving name for their white leader.

With efficiency, foresight able leadership, "Mr. Ben" led the program of material and spiritual living for the Winnebagos in an excellent manner. He had been born in the Indian Mission in Jackson County, he grew up with dozens of Indian children, who were always in his home or about his yard.

He learned to speak the Winnebago language fluently and after being ordained an Evangelical and Reformed church minister, he delivered many a sermon and conducted many weddings and funerals for the Indian people. The school that her directed in Neillsville had enrollments as high as 115 Indian children, living and receiving their educational and religious training within it.

World War II saw 76 Winnebago names on the roster of service with the armed forces, men and women volunteering for service. In 1941, Ben Stucki directed the organization of the Winnebago Handcraft Cooperative to assist Indians in marketing their handiwork. The cooperative continues today. Through the years, beadwork, baskets and leather good totaling from $8,000 to $25,000 per year have been marketed by this organization.

In 1947, the Rev. Mitchell Whiterabbit, a graduate of the Winnebago School, Neillsville High School, Mission House College in Plymouth and Lancaster Seminary in Pennsylvania, returned to the old Winnebago Mission as pastor and spiritual leader. He had served in World War II with U.S. Armed Forces. The Rev. Mr. Whiterabbit is now a leader of Wisconsin Indians, a minister and advisor to many people and tribes. He served as chaplain in the last winter Olympics held in the United States.

In 1950, the Rev. Jacob Grether, grandson of the earlier missionary, the Rev. Jacob Stucki, and a nephew of the Rev. Ben Stucki, came to Neillsville as assistant superintendent of the Winnebago School and program.

The Rev. Ben Stucki was honored with recognition as doctor of divinity at Lakeland College-Seminary in Plymouth in 1958. Dr. Stucki remained active in the general program, administering not only to Winnebagos, but Chippewas, Oneidas, Potawatomies, Menominees and Indians of other tribes as well.

Recognized as one of America’s leading authorities’ in Indian history, legend and lore, Dr. Stucki "sold" the attributes of the Indians as he traveled in many states telling the Indian story to the churches of America.

He told how in the inception of the Winnebago School program, Indians were segregated and not welcome in many white schools. "Through the years," said Dr. Stucki, "changing conditions saw many Indian children attending the public school nearest their home. This brought a change in the school program in Neillsville and during recent years a large percentage of the children at the Winnebago School in Neillsville have been orphan children or those from broken homes."

Dr. Stucki, in his fund-raising visits to distant churches, told his audience that "few people realize that the Indians contributed greatly to America. Lacking in numbers and unity, they contributed such food as Indian corn, beans, melons, squash, potatoes. The white potatoes are not Irish Potatoes, they are Indian potatoes."

He also pointed out that "the Indians once lived better than white man with their crops, fish and game. But they were pushed into small space on most worthless lands, and have been expected to maintain a livelihood where white people would starve." He urged white people to assist the Indian and set him good examples. Dr. Ben Stucki’s active leadership among the Indians was cut short by his sudden death on Oct. 3, 1961.

In the death of Dr. Ben Stucki the Winnebagos and other Indians of Wisconsin lost a sincere and capable leader. No one in the past 42 years has worked as hard or done as much for the Wisconsin Indian than Dr. Ben Stucki, who had been assisted during most of that period by his wife, Ella, who proved a valuable helpmate and a capable leader among Indian girls and women.

The position of superintendent of the Winnebago program in Neillsville was taken over in Oct. 1961, by the Rev. Jacob (Jack) Grether, who had served as assistant to Dr. Stucki from 1950 to 1961.

Today the school at Neillsville is known as Winnebago Children’s Home and it is approved by the state of Wisconsin. The former home of the Rev. and Mrs. Ben Stucki is now Morning Star Home for teen-age girls, the former home of the Rev. and Mrs. Jacob Grether is now Hiawatha Home for teenage boys. The former school is now the home for younger boys and girls. The building also provides the necessary dormitory rooms for staff members, school rooms for classes, grades one to three, and for other needs.

The Neillsville Indian School: A View of the past